It used to be that a visit to Northern Norway was just a summer thing.

Then Iceland happened. Before, most foreigners traveling to Iceland would be the most extreme fans of Björk and/or NASA scientists searching for landscapes similar to Mars. Then Game of Thrones was filmed in Iceland. The 2008 financial crisis sent the Icelandic currency to crazy low levels. Icelandair offered free stopovers between North America and Europe. All this, and definitely Instagram, lead to a huge increase in Arctic tourism.

Iceland soon again turned into an expensive destination. And yet the tourists kept on coming, in ever larger crowds.

Except hot springs, anything Iceland offers can also be found in Northern Norway; snow, ice, northern lights, amazing scenery, and prohibitively expensive alcohol. So when Iceland gradually filled up beyond capacity, the smart tourists started going to Norway instead. They arrived year-round, and the tourist industry eagerly adapted. Places that a decade ago would be closed and dead during winter, now offer accommodation, food, and plenty of activities.

I have visited the Lofoten archipelago in all seasons. While it’s obviously still the same place, the different times of the year offer vastly different experiences. I honestly can’t say which version I prefer. Still, through a series of summer versus winter photos of the same spots, I’ll help you compare the options and maybe find out what works best for you. 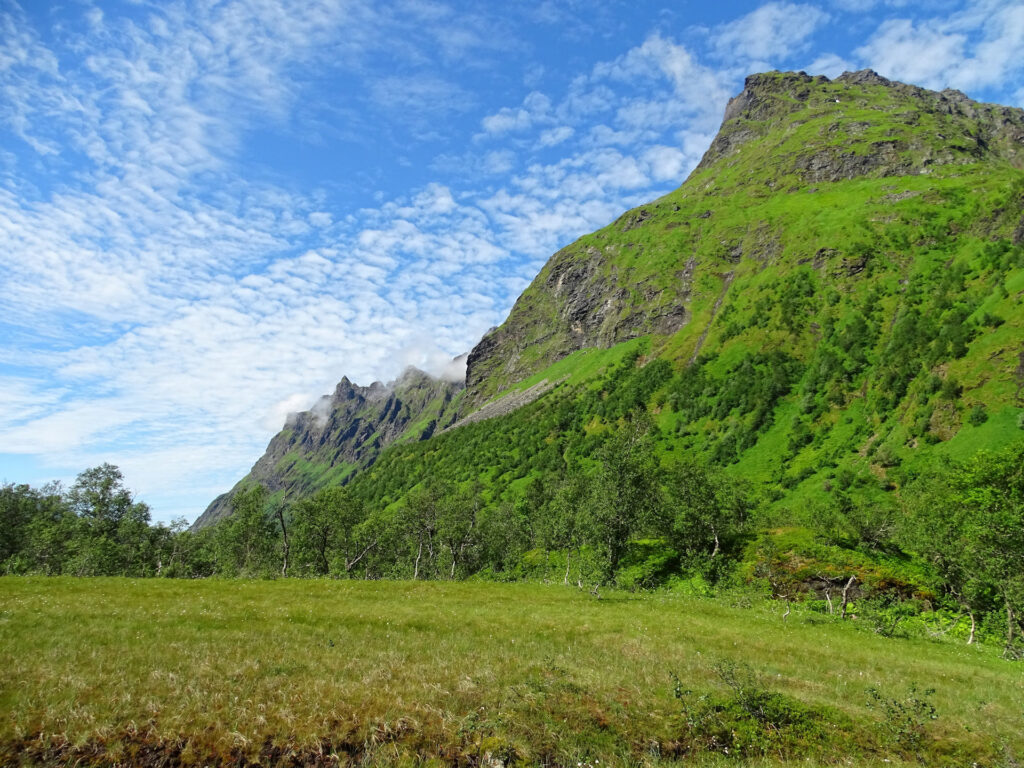 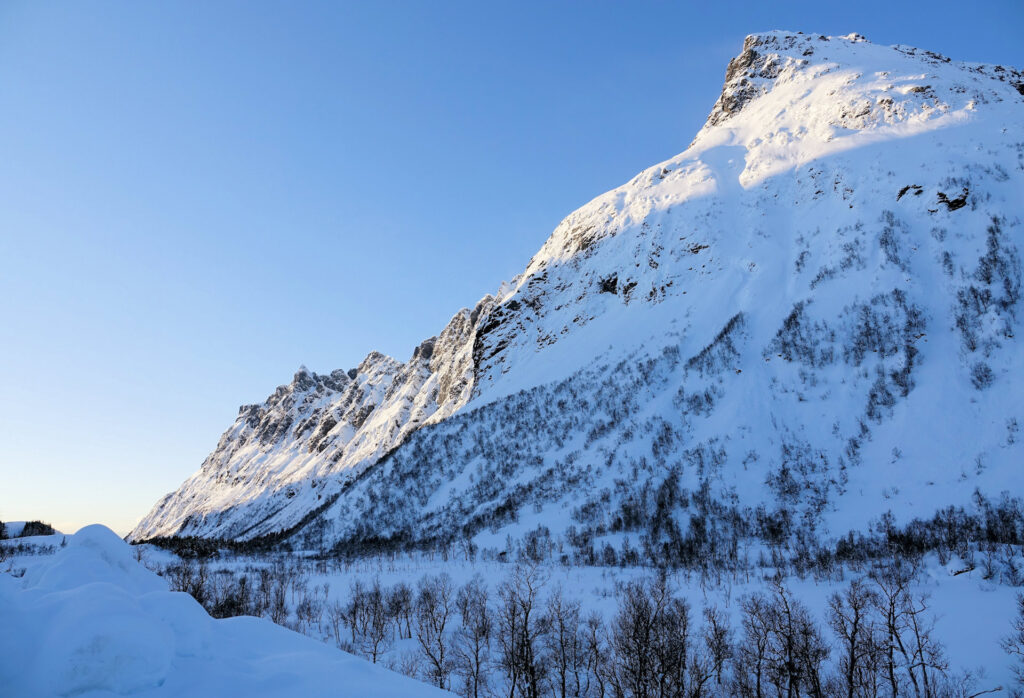 Coming from the mainland, having first flown into Harstad/Narvik Airport, we drive past Møysalen National Park before we actually enter Lofoten.

It’s a feast for the eyes both summer and winter, but if hiking is important to you, summer is your only real option. In winter, experienced skiers can go on strenuous climbs and earn themselves some divine descents. If you don’t know exactly where to go, though, you risk ending up in an avalanche. 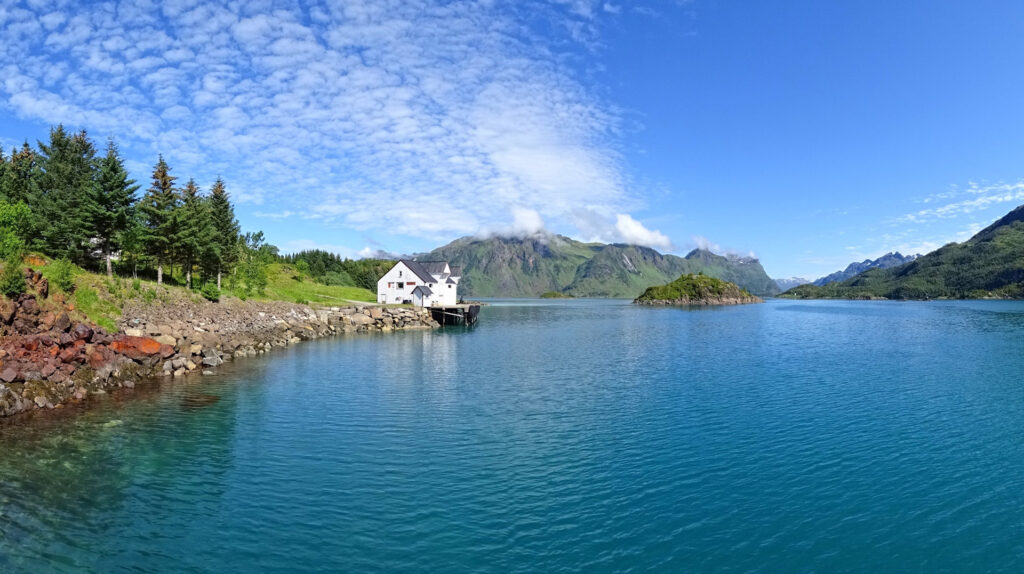 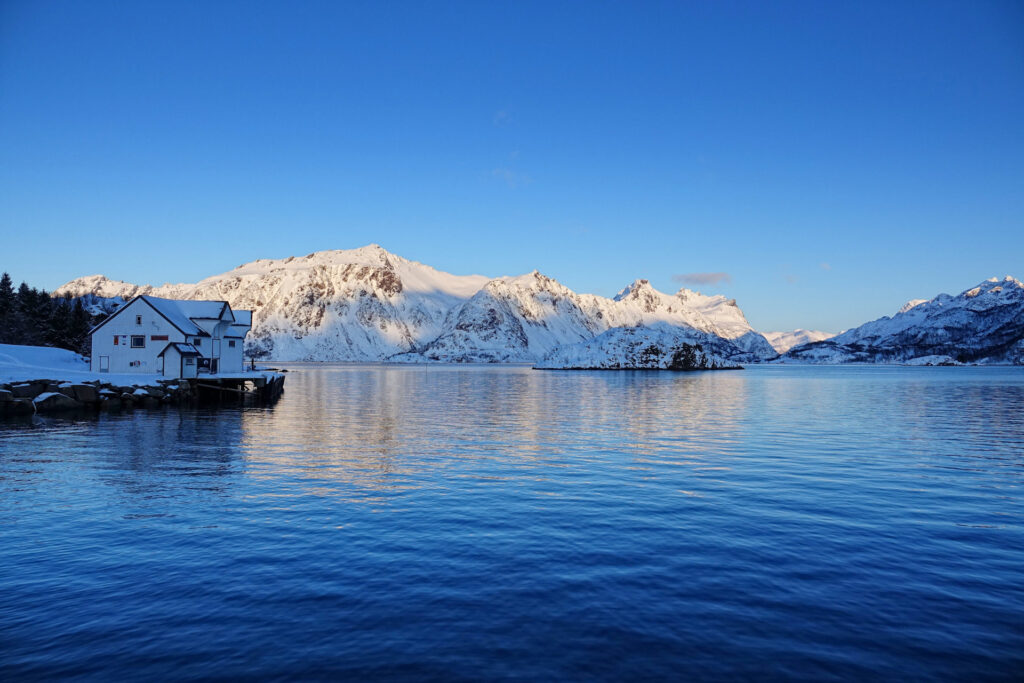 This stretch of water, Ingelsfjorden and Raftsundet, is what separates Lofoten from Vesterålen and the mainland. Standing here, you just know you have arrived.

In winter it’s mainly a world of shades of blue. The sun doesn’t climb very high in the sky, so you find yourself in the shadow of some mountain most of the time. It’s still a pleasant palette.

The summer version of Lofoten can still be cold, but at least it will look warm in the photos. Just stay out of the water, despite its inviting hues. Algae often colors it green or turquoise, making the scenery more than anything reminiscent of Hawaii’s greatest visual hits.

Both color schemes are just lovely. 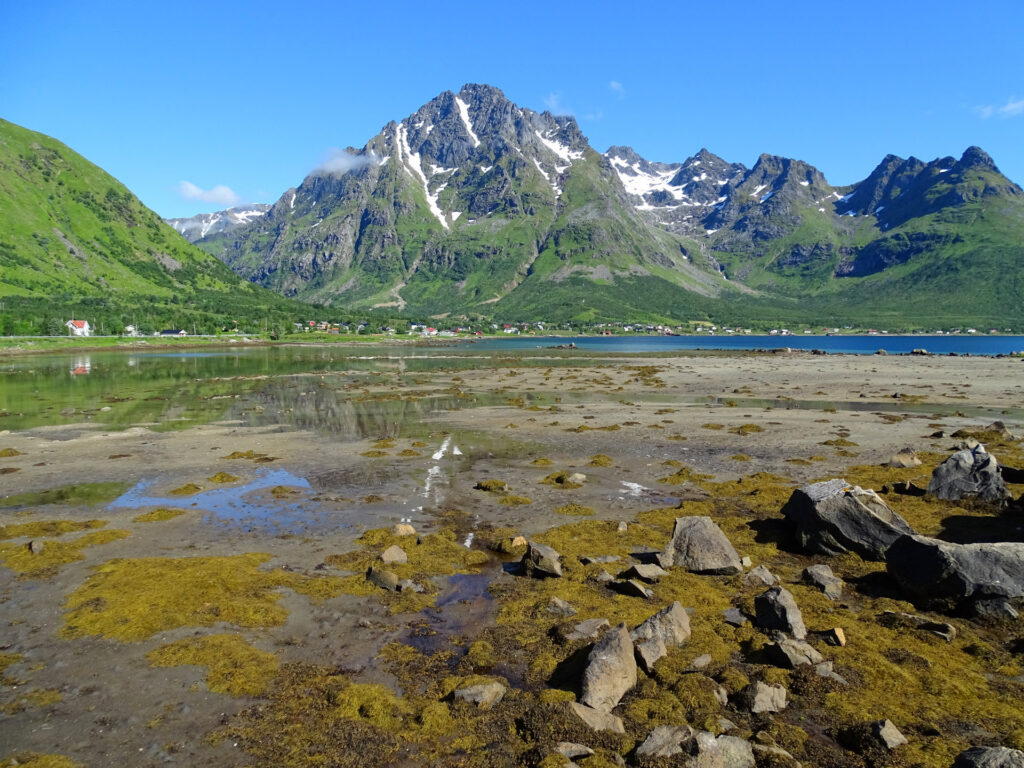 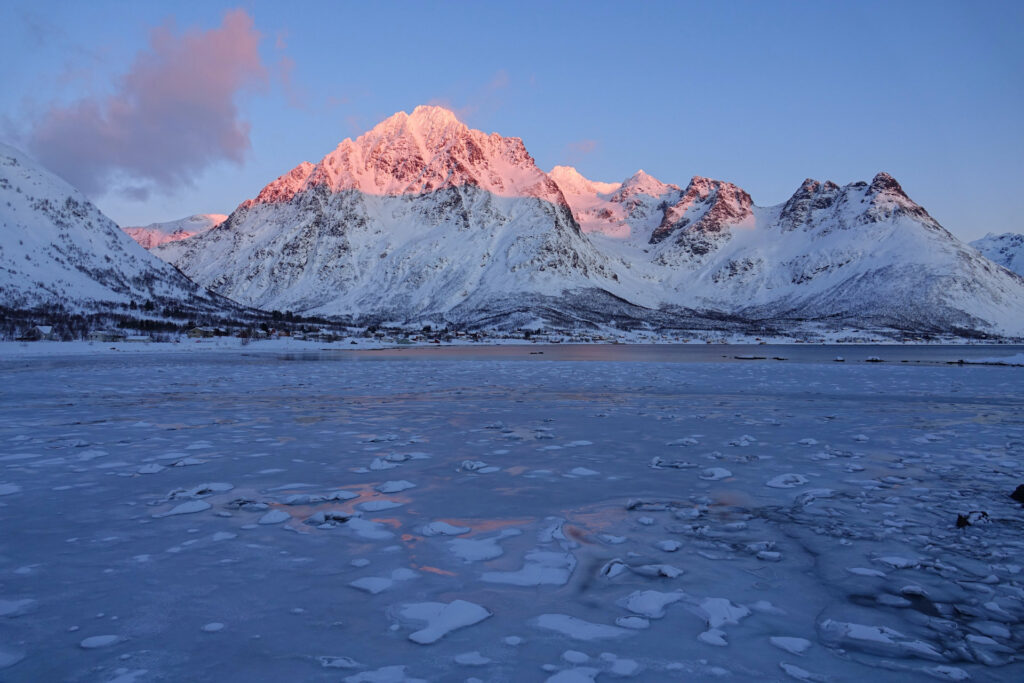 This is the view of Laupstad village on the island Austvågøya. The mountain tops are likely to be decorated by snow whenever you visit here, but the amount will differ a lot.

If you’re a beachcomber, walking the shore during summer will let you discover all kinds of strange sea life. In winter, ice on the ground makes the beaches slippery and treacherous. The penguin inside you will hopefully surface. With a bit of careful practice, you’ll eventually master a sliding walk. 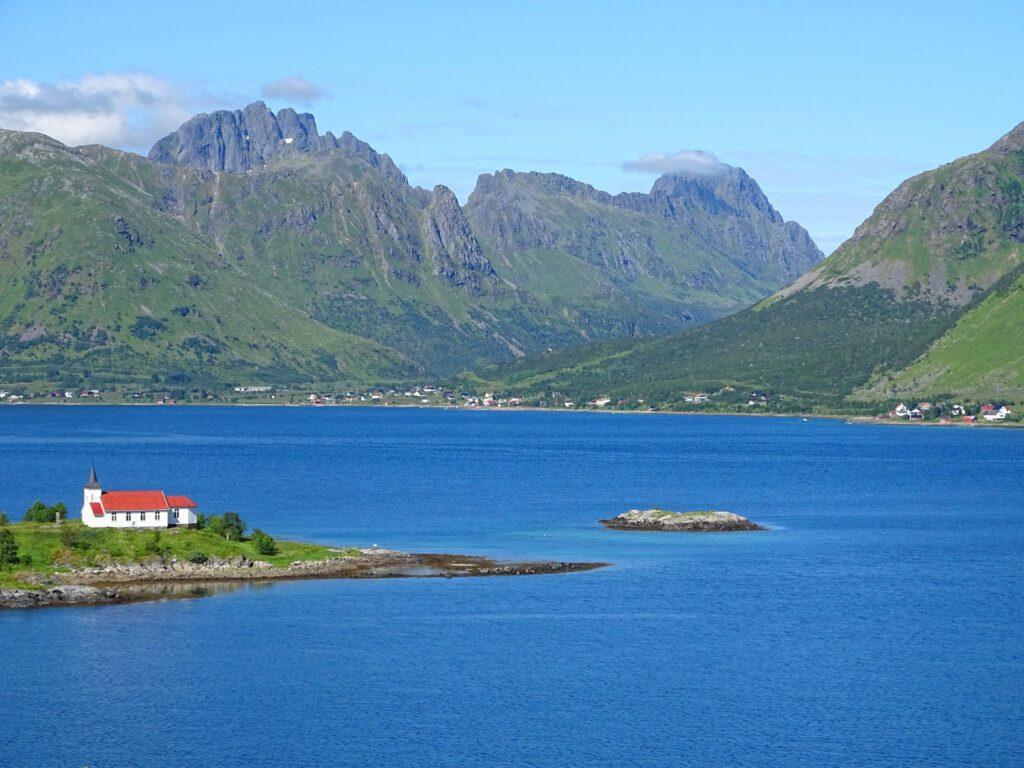 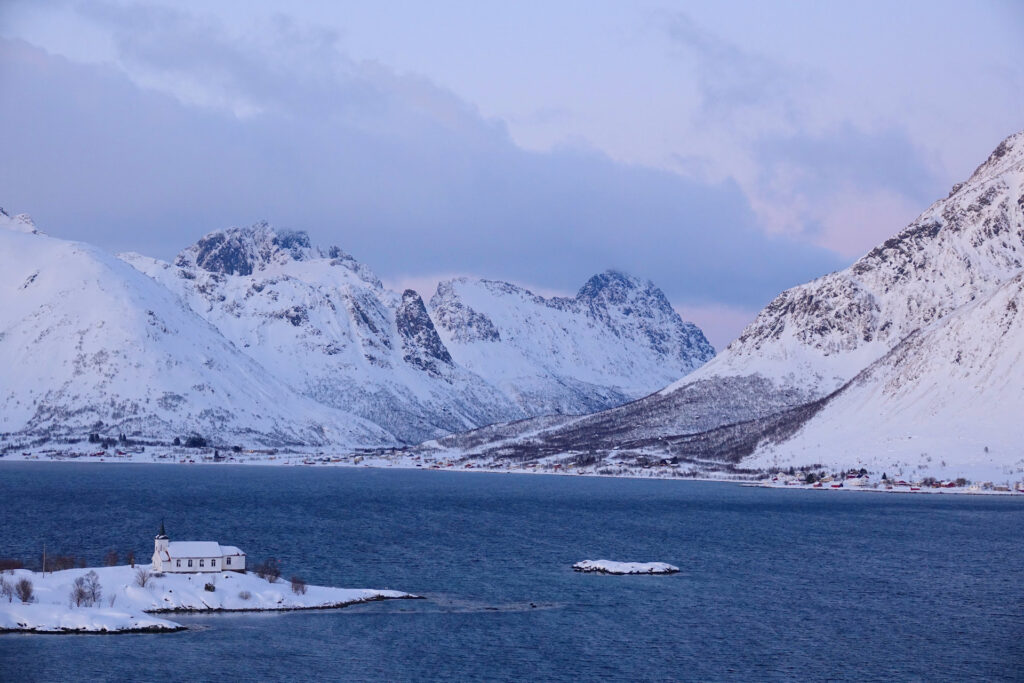 The chapel at Sildpollneset looks great throughout the year. However, the winter version certainly does the better job at demonstrating how these surroundings and this climate can make people desperately desire the existence of a higher power to request some lenience from.

If you want to really experience the awe-inspiring harshness of the Arctic, winter is probably your best bet. 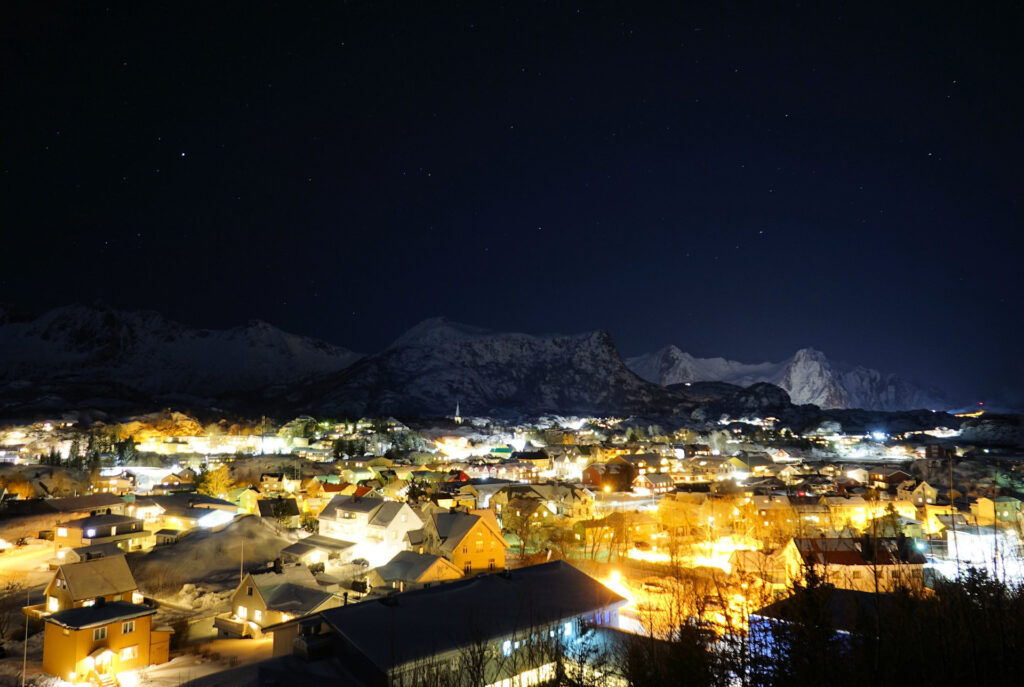 From the Breidablikk (“Wide view”) viewpoint in the center of Kabelvåg, you’re treated to the sight of “The Lofoten Wall”. It looks like an almost continuous range of mountains spread out across various islands. From here you can plan many different hikes, and just a few hours later look down at Kabelvåg from one of the mountain tops.

The winter view from the same spot is potentially a convenient spot for catching the northern lights. A lot of sky is visible from here. The lights from Kabelvåg will make the show in the sky less intense, but the combination of lights above and below is also beautiful. When you get too cold for comfort, your accommodation in Kabelvåg or Svolvær is just a few minutes away by foot or car. 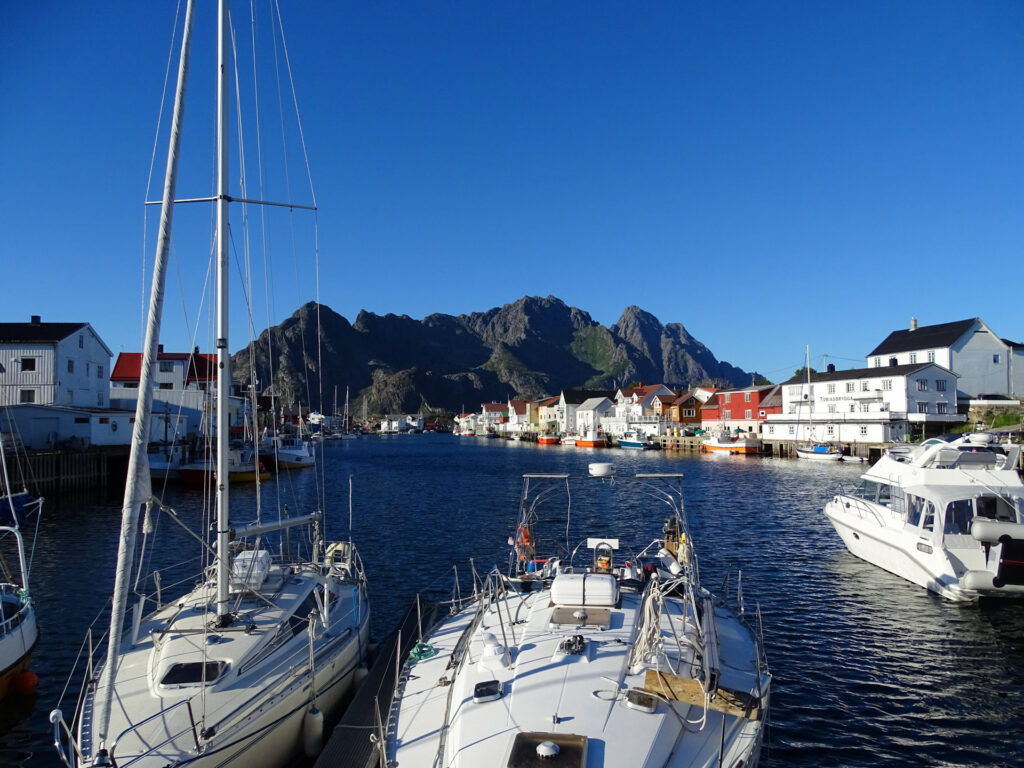 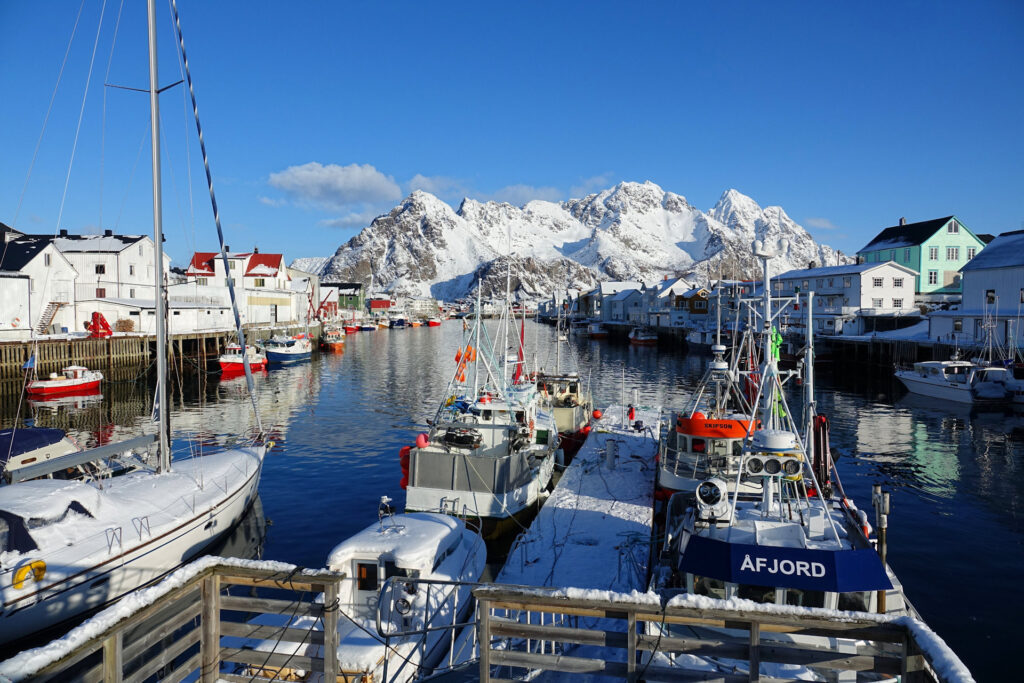 The next mandatory stop along road E10 is Henningsvær. It’s a 300 years old fishing village with just 500 people living in it, but it offers surprisingly much to see, hear and smell.

In summer you will find the natural harbor full of leisure boats and kayaks. In winter you’ll see the “real” Henningsvær. Between January and April, Atlantic cod comes in massive numbers to the coast of Northern Norway to spawn. Because of this, small fishing boats come from near and far to participate in “Lofotfisket”, the Lofoten fishery.

Going to a restaurant or bar and meeting a group of fishermen who just landed a huge catch, can be quite the experience. Do not attempt to drink them under the table. 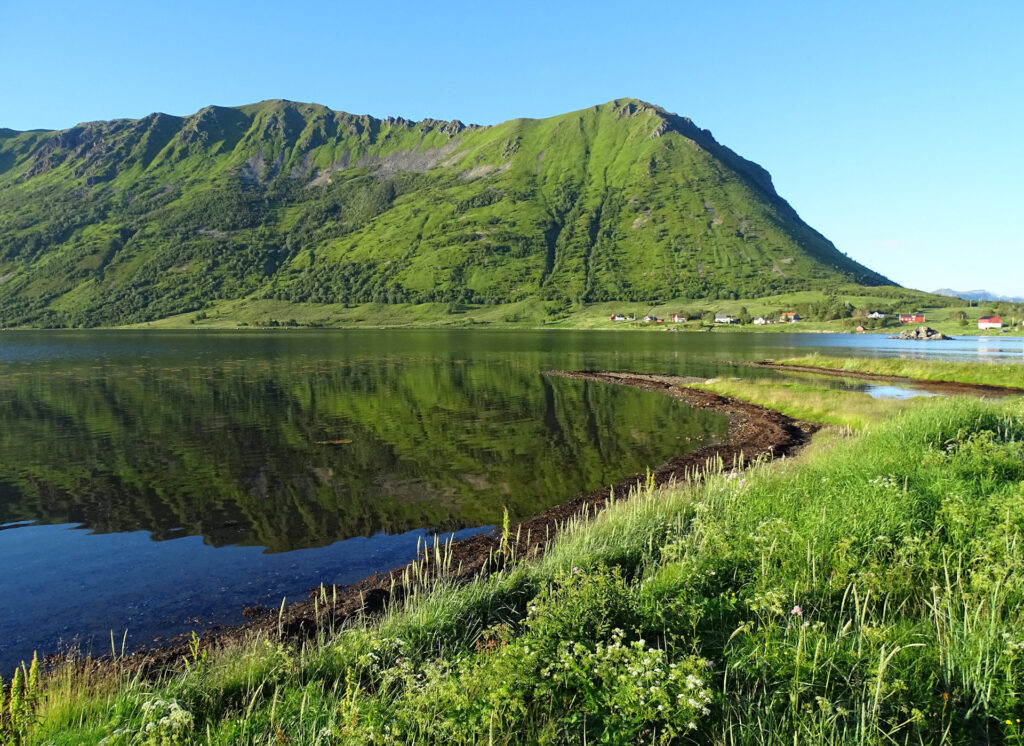 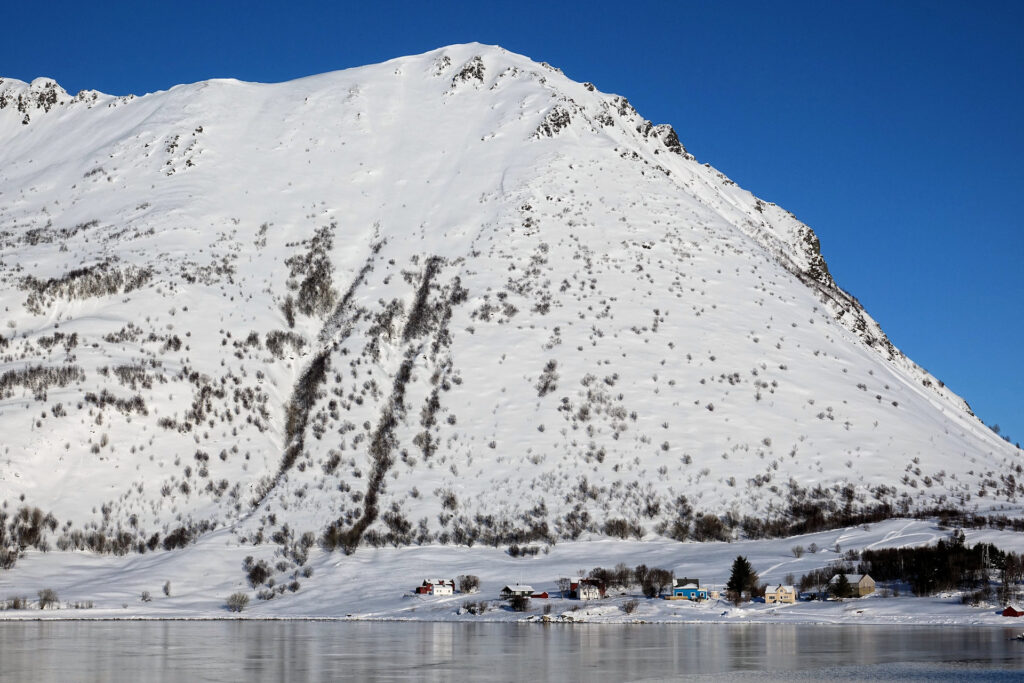 The small cluster of houses at Steira looks incredibly idyllic in summer, squeezed in between the Steirapollen body of water and the mountain Limstrandtinden. Come back in February in a snow-ridden year, though, and your first thought is likely to be “Won’t somebody please think of the avalanches?!”

While it may look somewhat dangerous, most buildings in Lofoten are in just the right place, thanks to centuries of trying and failing.

That said, if you’re on a road trip, avalanches is something you should always keep in mind. There’s a risk you may be unexpectedly delayed because the road has to be cleared after snow and/or rocks fall onto the road, in places where there is no alternative route. Also, never stop and park your car, not even for a quick photo, in places where the road goes right next to a steep mountain side. 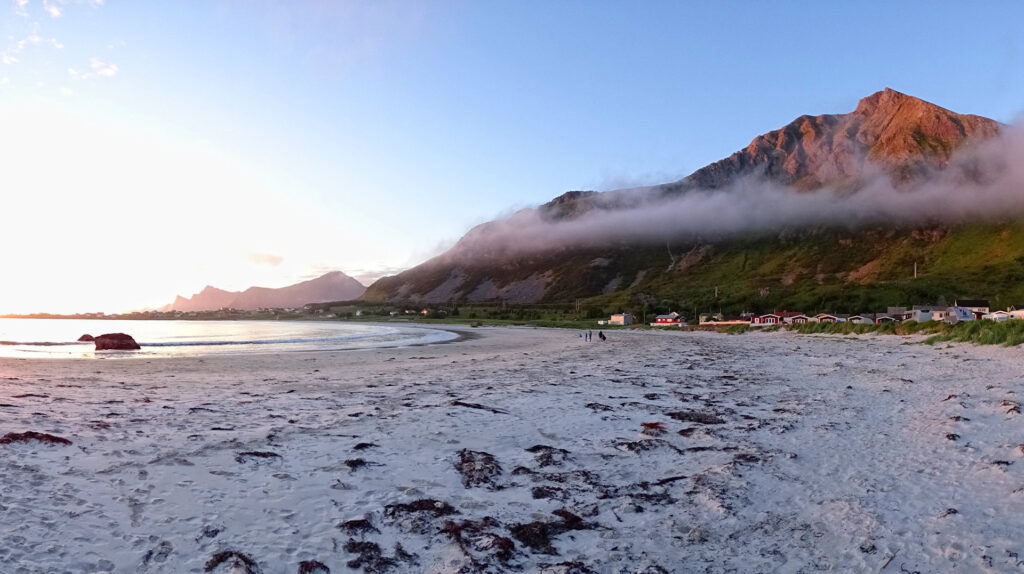 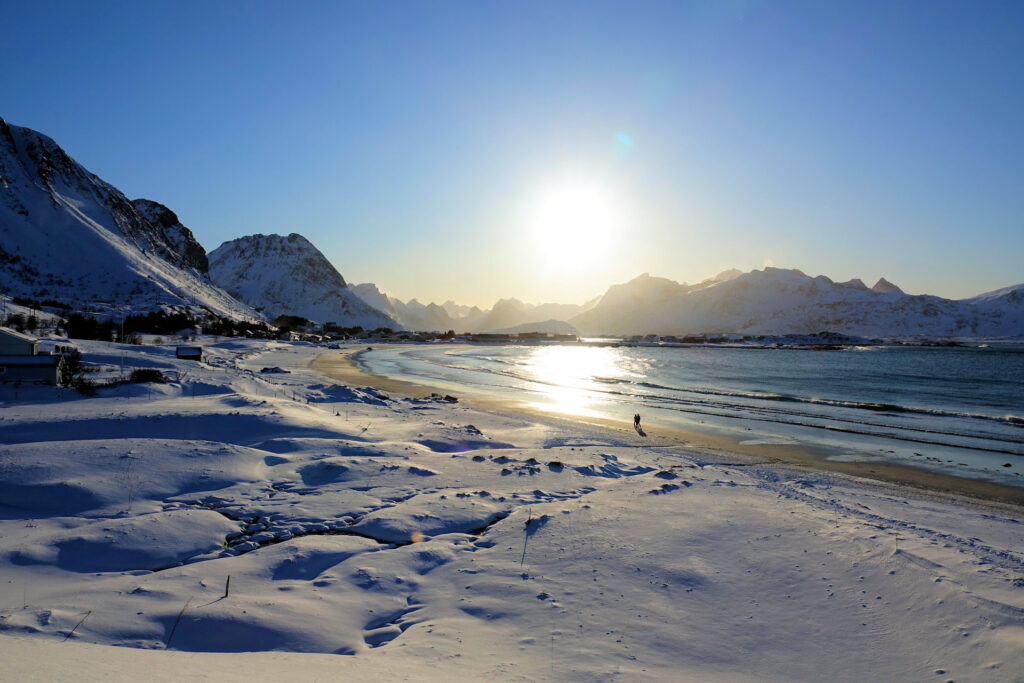 Lofoten has so many incredibly beautiful white beaches. Many of them require a bit of a hike to get to, but the one at Ramberg is a drive-in. It’s great for a dreamy walk, year-round. The water is roughly the same temperature year-round, too, so there’s just as much or little need for swimwear whenever you go.

The photos were taken from opposite ends of the beach. The winter one is from a viewpoint next to a parking lot, north to south, and the summer one is what the beach looks like seen from Ramberg village, south to north. Oh, and the summer photo was taken very close to midnight, actually. All in all, the summer version of Ramberg beach is probably the most likable. 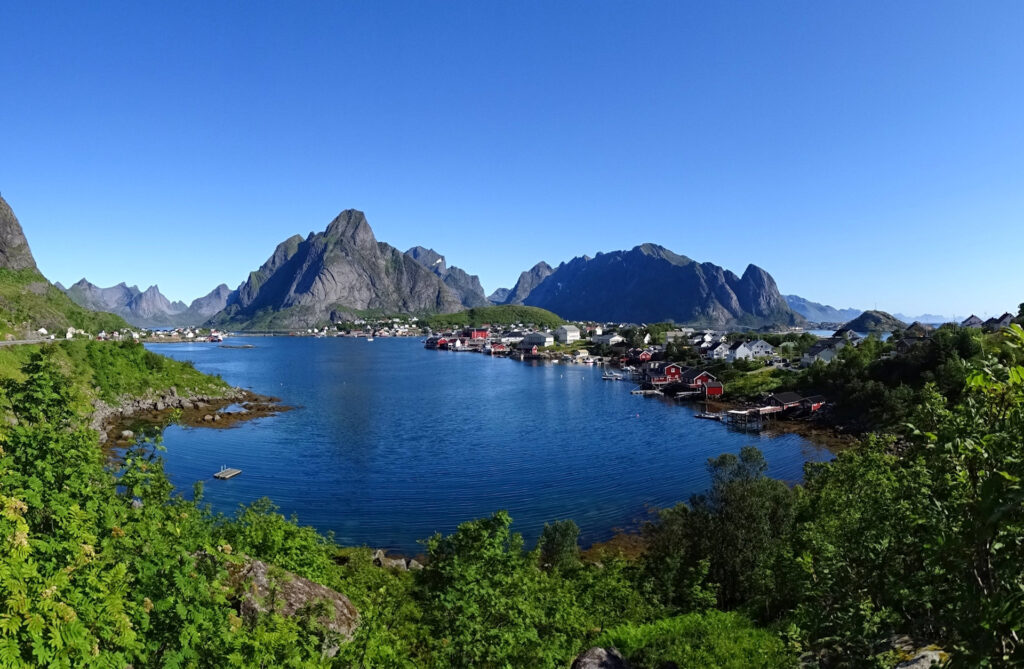 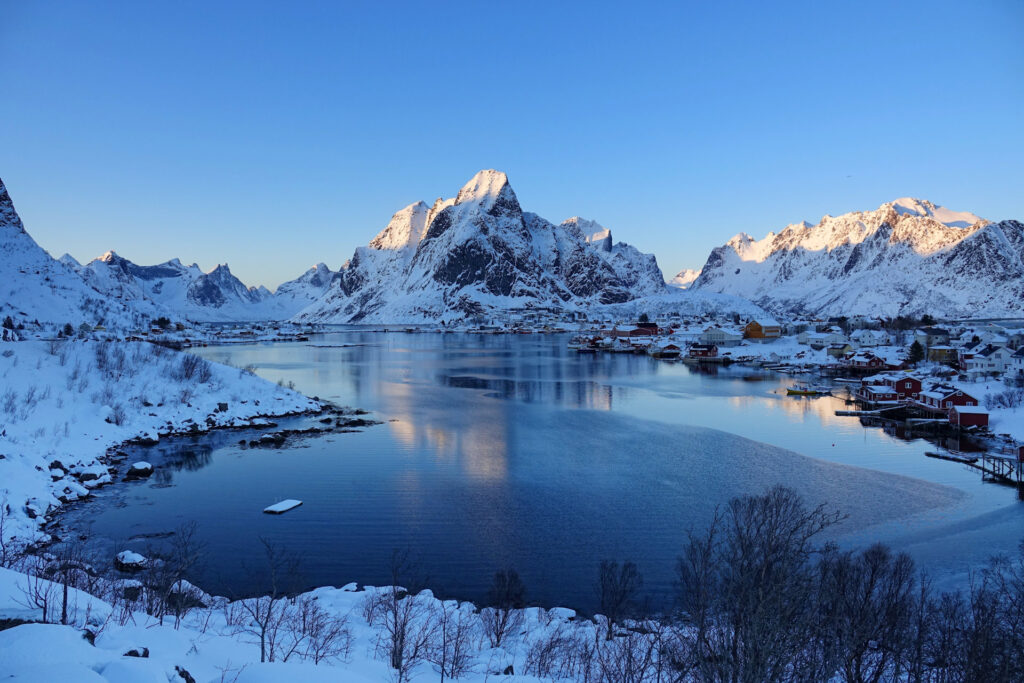 If you have seen only one photo from Lofoten in your life, it’s probably this one. At the entrance from road E10 into Reine village, there’s a parking lot with this view north towards Reinevågen bay and the mountain Olstinden.

It doesn’t matter when you come here; groups of tourists on photography courses/tours will always hang around here. Probably fewer in the winter than in the summer, but there will still be plenty of people. I don’t have to tell you why.

So even with summers having more cars on the roads, there’s a higher risk of experiencing a traffic-related issue during winter than during summer. You should not worry too much, though. The traffic accident rate in Norway is low, and the many turns and narrow roads means that people do not drive very fast. If there’s an accident, it’s unlikely to be fatal. 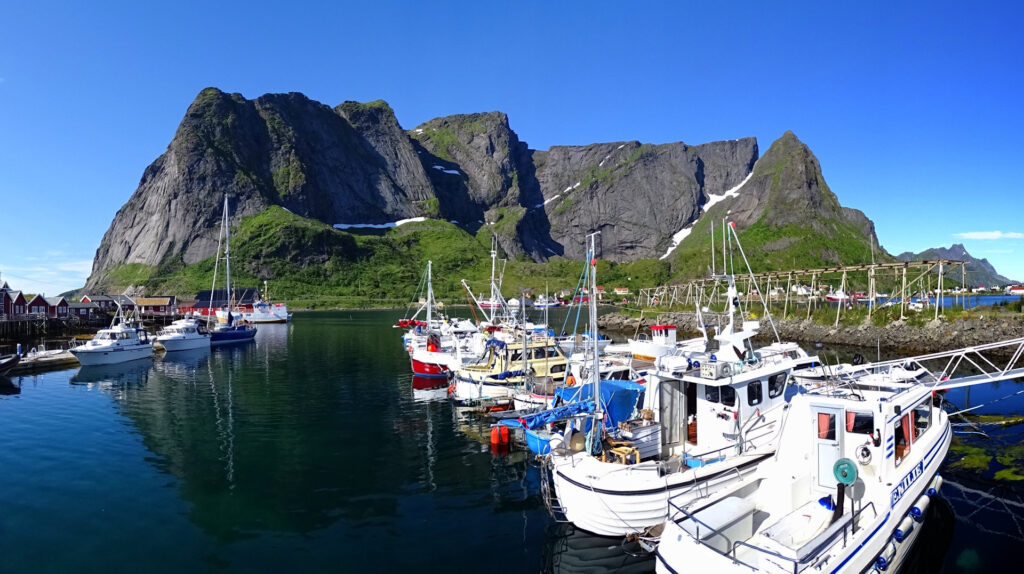 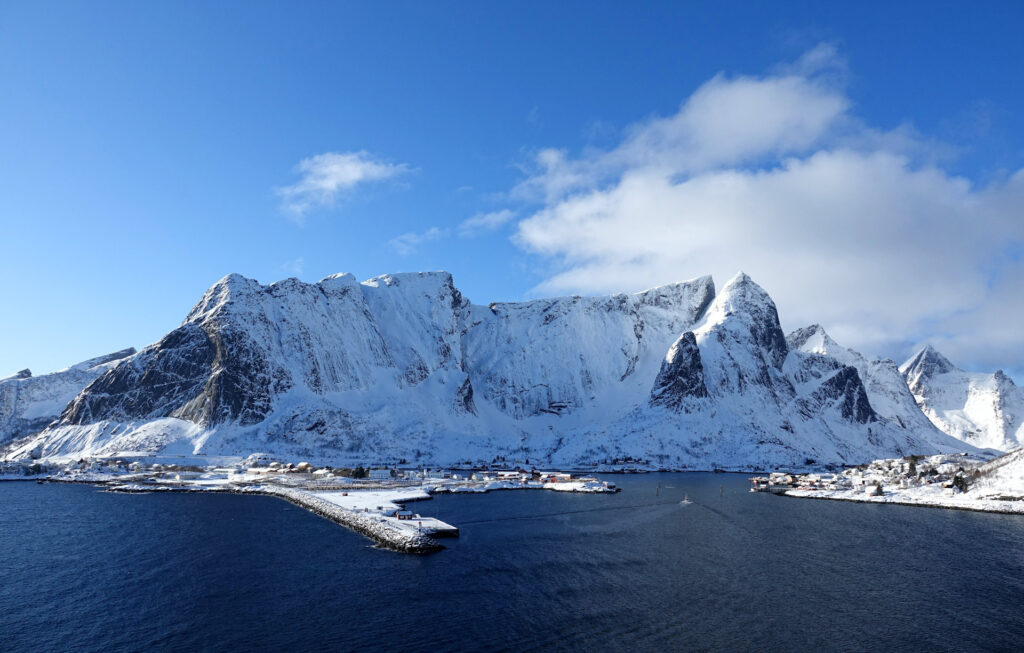 One of the most spectacular hikes in Lofoten is to make your way up to the mountain ridge Reinebringen. It used to be a bit sketchy, but now there’s a good trail with solid stairs leading up behind the mountain you see on these photos. For most people, that’s basically a summer-only option. 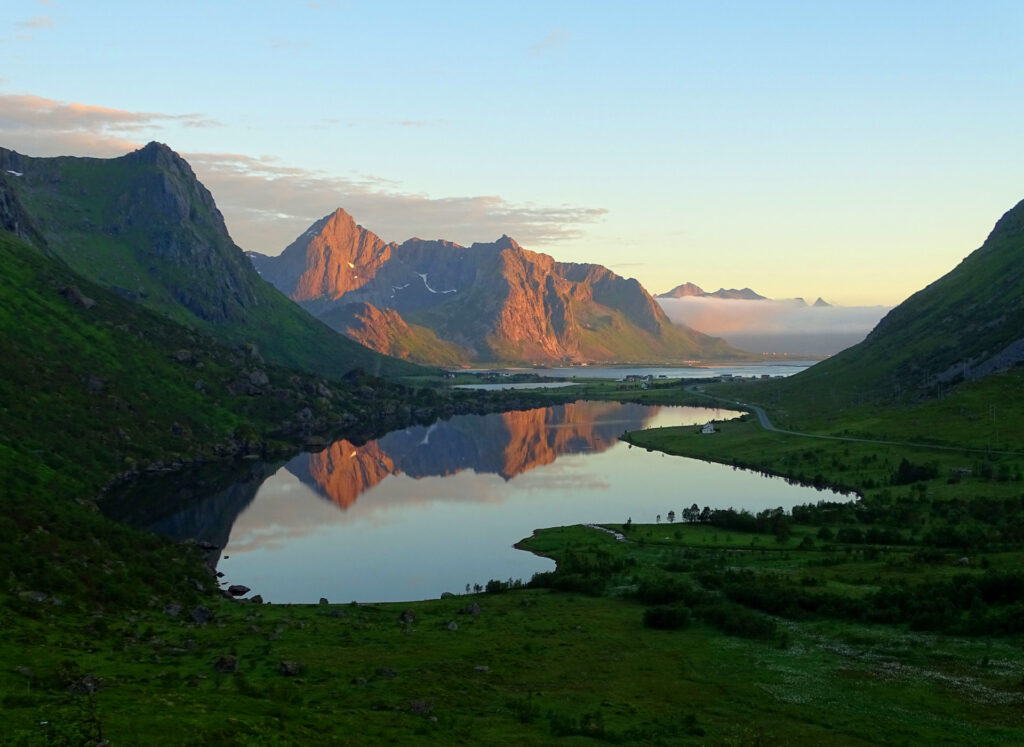 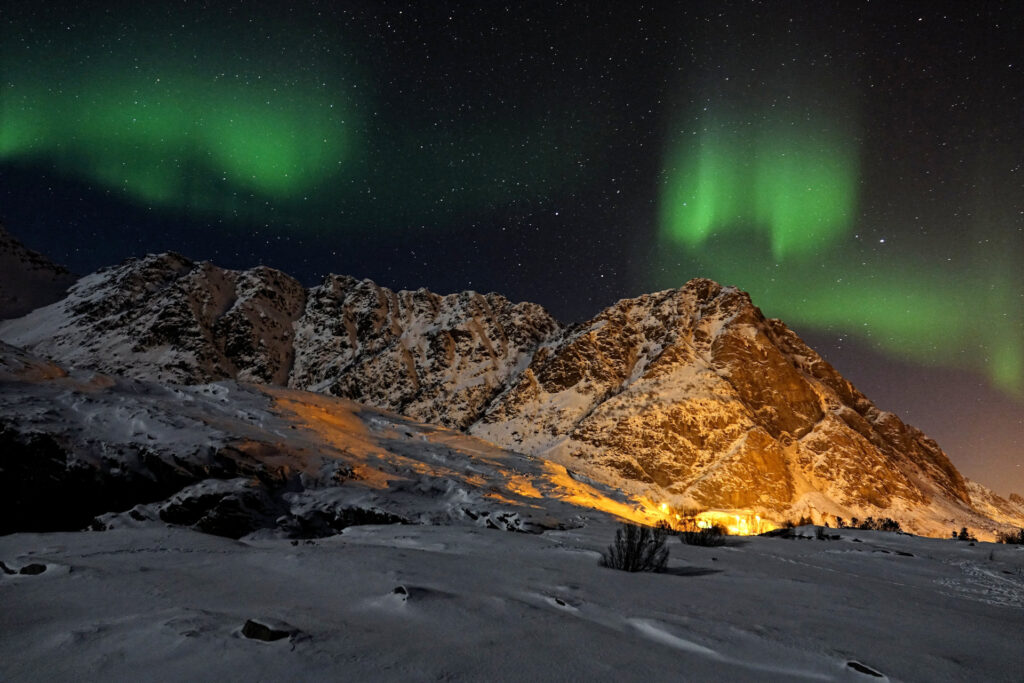 In real life, you rarely go back somewhere just to see what it looks like in a different season. Instead, you go at different seasons because you want to see entirely different things. This is true for Lofoten as well. For instance, midnight sun and northern lights are mutually exclusive phenomenons.

If you want to see the midnight sun, you have to go in the summer. Photographers everywhere know the golden hour, that time of the day when the scenery benefits from the red glow of a rising or setting sun. In Lofoten, technically the midnight sun lasts from 28 May to 14 July, but the entire months of May, June and July will give you many hours of golden hour each and every day, weather permitting.

However, if you care more for the northern lights than for the midnight sun, you should visit Lofoten between late September and early March. Again, you need the weather to play nice with you, but by going in that period and learning to interpret the northern lights forecast (it’s easy!), you can travel relatively cheap, without a guide, and still find the show in the sky on your own.

No, wait! I have one final argument, for those of you who can not or will not travel in a rental car. If that’s the case, summer travel is your best choice. Summer is high season, which means that traveling by public transportation is much easier done than during the winter. Both ferries and buses have more frequent departures, and several routes are only available at all in the summer.

I hope you found this useful, or at least interesting. Let me know if there’s anything else you need to know before you start planning your own trip to the north, be it a cold or a less cold one! 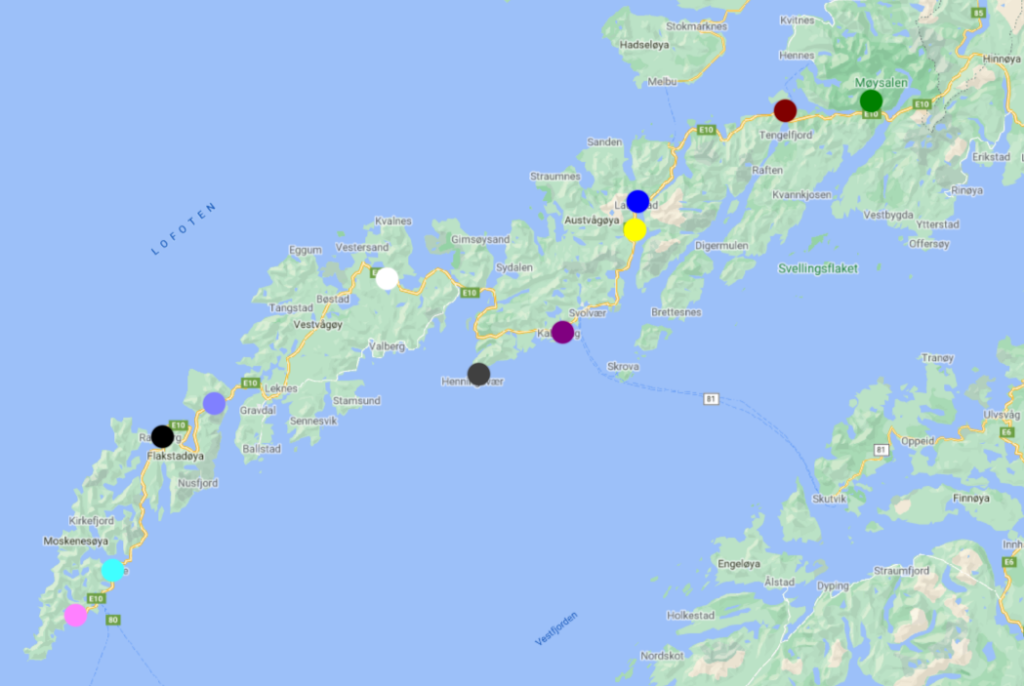 Locations as shown on the map, right to left:

Pink = Å, end of the road in Lofoten