Hey, just a quick note: I am fully aware of the ethical issues involved when going to North Korea. This article is not about those, but about a visit to a more or less normal school, which resulted in what I believe was a positive and relatively authentic experience for everyone involved.

To anyone who has never visited, it is a well-known fact that tourists to North Korea only get to see the meticulously choreographed version of the capital, Pyongyang.

Many years ago this may have been true. Most western visitors back then were journalists, generally in pursuit of a sensationalist headline.

North Korea understandably wanted to have their country portrayed as a good place to live, so they did all they could to make sure that journalists were shown the sunny side of everything. Their plan backfired heavily, as their act was all too transparent. The journalists got exactly the angle they were looking for. “We’re only given a show, and their leader is crazy. This must mean that the real North Korea is horrible, and only horrible. Read all about it!”

Most tourist visits to North Korea includes a stop at the Mansudae Grand Monument, where a voluntary bow is done.

Recent years have brought some change. Actual tourism in North Korea has become a thing. All tours are still run by the government, but usually sold by non-Korean tour operators. These companies try their best to offer more interesting and worthwhile tours than the ones journalists get. Journalists are not allowed on “normal tours”.

To make tours more interesting, the foreign tour operators keep pushing the limits for what tourists get to see and do. You can now go on many kinds of themed trips across much of the country. There are obviously no tours of prisons or concentration camps, but the range of available tours may surprise you.

If you want to, you can travel by train from Pyongyang to Vladivostok, Russia, pausing in several towns and cities. If you’re an architecture enthusiast, special tours give an introduction to this authoritarian regime’s extreme architecture. While you can criticize it from many angles, the results are often incredibly fascinating.

For those who want to learn to speak Korean, you can go on a three-week language school, attending classes in the mornings, and have various interaction experiences in the afternoons and evenings. There’s a ski resort you can visit, coastal tours, hiking tours, an annual run-a-marathon-through-Pyongyang tour, and many more. These tours are obviously not all tightly choreographed and controlled. 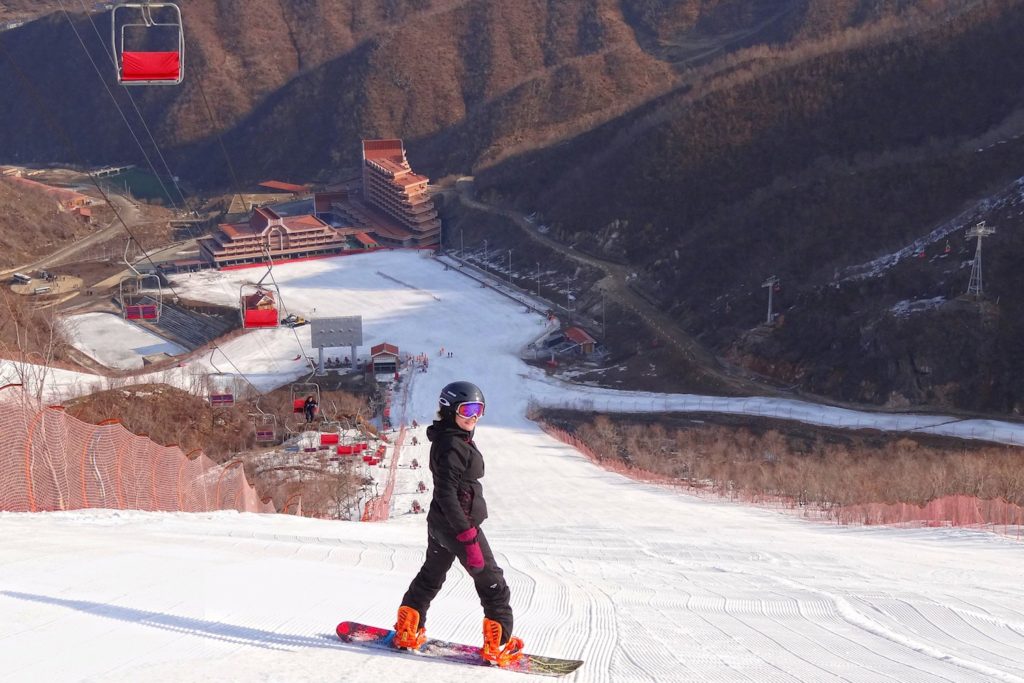 Snowboarding in North Korea is something you may not have considered as an option. But it is.

As part of a semi-controlled nine-day tour of North Korea, we stopped by at a relatively normal school. I was of course expecting the worst, but I think it turned out to be a great example of something that could have been a pure propaganda show, but actually was just about the opposite.

Many of the places we visited were incredibly boring, consisting basically of little to see and a guide speaking at length about whatever we were looking at. This morning we had already had two stops like that; Paeksong Revolutionary Site (“Tour the old classrooms and hear about how students lived in this forest during the war.”), and Paeksong Foodstuffs Factory, where all the workers mysteriously were “away on vacation”. After this, we all wished we could go on a vacation, too, until we remembered that we kind of already were.

Our next stop was translated as the “Kim Jong Suk Higher Middle School for Gifted Children”. The school is named after the wife of North Korea’s first Kim and the mother of it’s second. The trio forms a kind of holy trinity for North Koreans. Going to a school named after her should be pressure enough for anyone, but with the “for gifted children” part added on top, we expected to meet a pretty special group of young people. 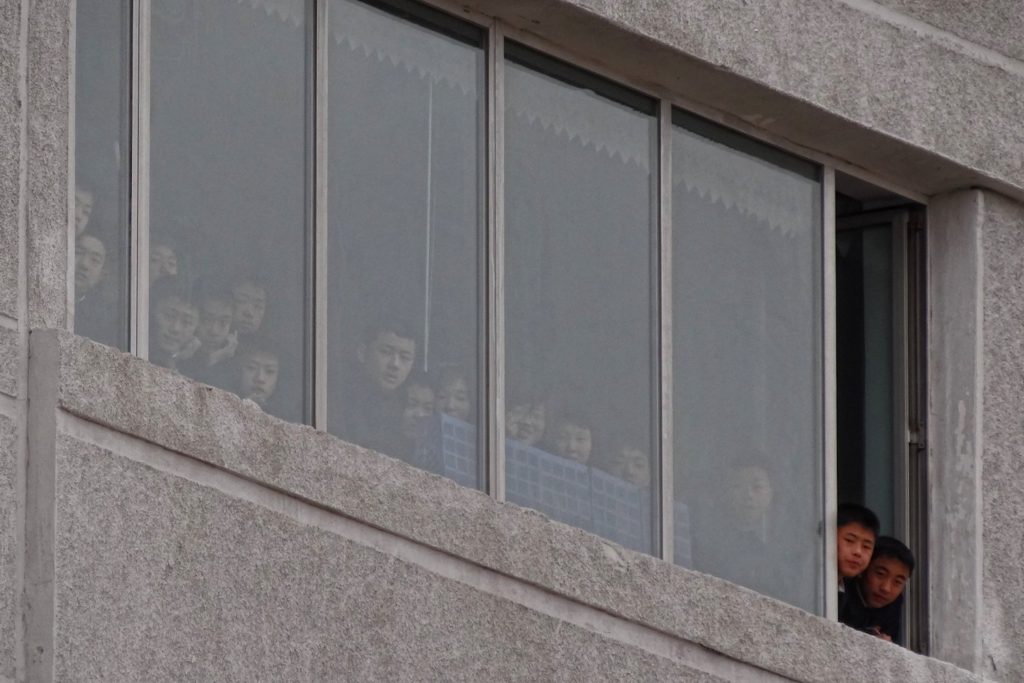 Visibly excited children were spying on us from every window on the school’s facade as we arrived. If a group of Americans or Martians had come to visit my school when I was little, I would have done the exact same thing.

With the children looking at us and pointing and laughing from behind the windows, we all played thoroughly impressed as the principal welcomed us and told us about the high standards of the school. He claimed that the children here did projects like “Cloning of rabbits” and “How to make hats out of polar bear skins”. This was too amusing to be boring, and we smiled and smirked as we encouraged the principal to give us further details about these projects. There was little of that.

Then we were shown the computer (singular) they used to access Kwangmyong, North Korea’s own intranet. Kwangmyong is exactly like the Internet, except it doesn’t have that much information on it. All the contents must be manually translated and carefully made suitable for consumption by North Koreans. Most of the pages are optimized for Internet Explorer 6 run on a pirated copy of Windows XP.

Interestingly, the students seemed to prefer to access web sites through IP address rather than URL, meaning that if they had been allowed to, they would look up my site as something like 50.63.89.1 instead of as bjornfree.com. This is because they find numbers easier to type and memorize, rather than what Latin characters they must use to spell out www.letsallhailkim.kp and whatnot. 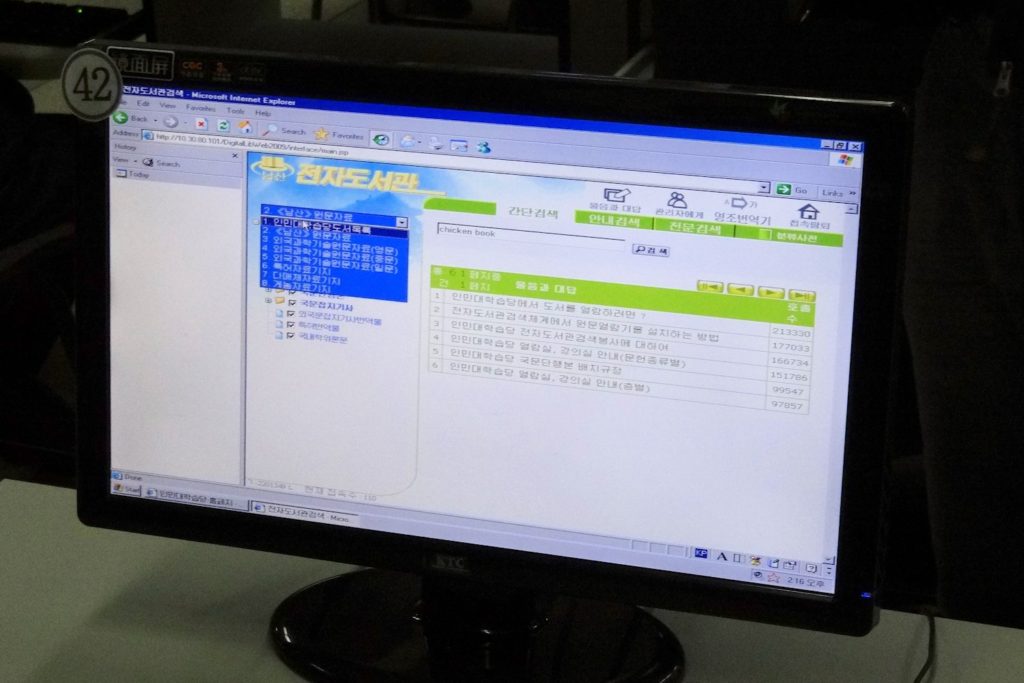 We were invited to participate in an English language class. The children in it were all giggly and curious, acting like children should. It was nothing like the school performances you typically see reported from North Korea. You know, the kind where a group of five-year-olds with less than authentic smiles deliver a pitch perfect rendition of the most complicated piano piece Mozart ever wrote. On accordions, no less.

Our interaction with these gifted children was an entirely positive experience. Like any of us will do when we talk to somebody else in a language we don’t yet master, they did not speak much, but they seemed to understand most of what we said. When we asked them about their favorite activity, the first one who answered liked to play the piano. The second liked to play the ball. The third liked to play the ski. And so on. Rarely have I met more playful individuals.

And Now For Something Completely Different

Meeting the students was wonderful, but the real treat of visiting this school was still ahead.

As a grand finale to our visit, we were allowed to see the school’s collection of taxidermy! “Taxidermy” is a fancy name for the concept of replacing the insides of a dead animal with something else, as well as you can, and then putting it on display. If possible, the resulting object should look somewhat similar to a living animal.

No explanation was given about what we were about to see, we were just guided through a door and into a room. After decades with limited a food supply in North Korea, it’s not surprising that most species that used to live there have gone more or less extinct. It is all too tempting to help yourself to food that walks freely around your home. Therefore, it makes a lot of sense to have stuffed animals on display in a school. It may be the only way most children here can see real animals, albeit only with lifeless and somewhat rearranged bodies.

Some of the animals must have been retrieved from horrific traffic accidents. To avoid embarrassment on behalf of both the animal and the taxidermist, the worst-looking part was generally squeezed up against a wall. Sometimes that part would be the poor animal’s head.

The collection included pet cats and rabbits, although I doubt anyone would go home and ask for a kitten after seeing these monsters. In some cases, the taxidermist must have introduced spare parts, such as eyes or teeth, from absolutely the wrong drawer. That makes for unexpected results. A rabid, squinting seal must have turned countless children off from any beach-going for the rest of their life. 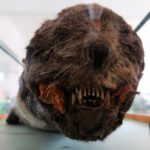 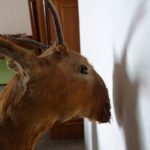 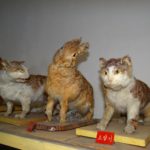 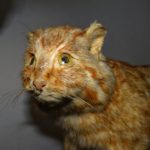 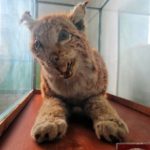 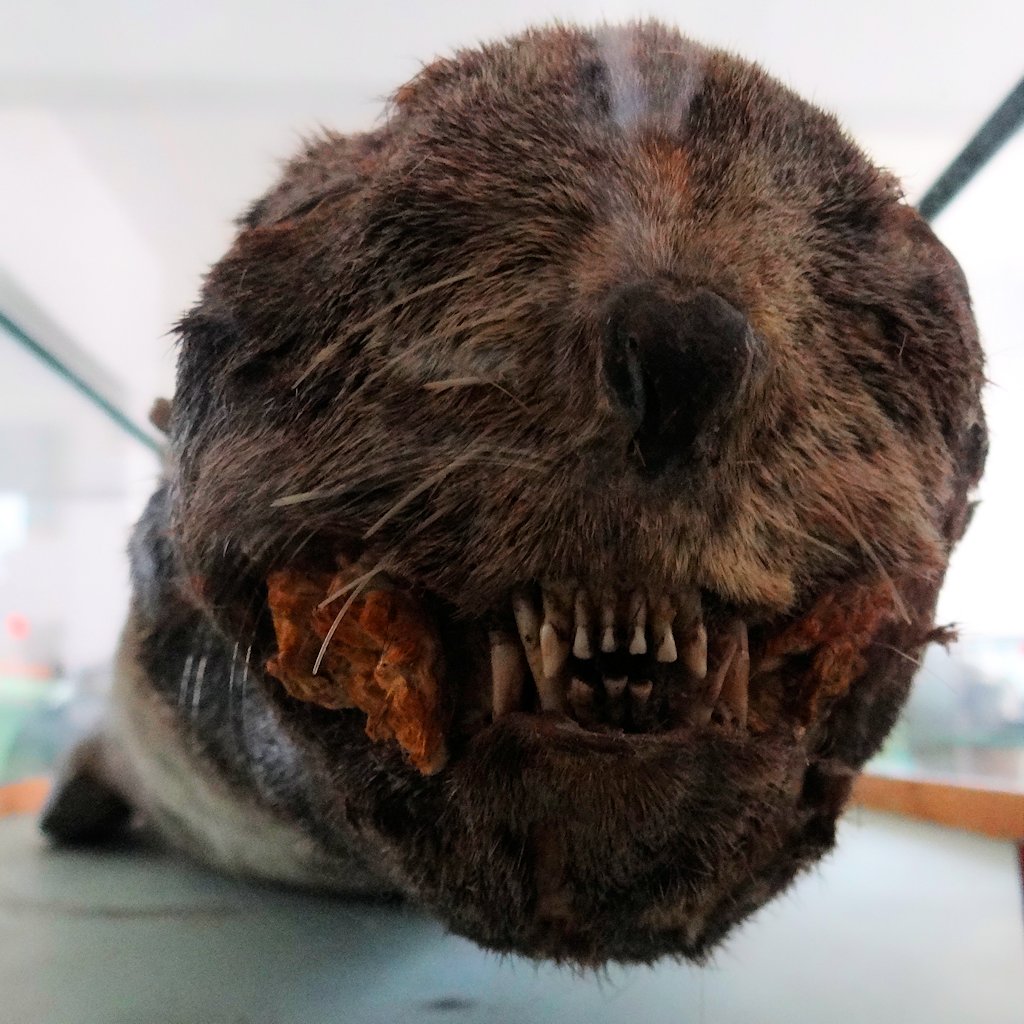 You can slide between the photos if you want to. Be prepared to be scared, though!

One possible explanation for this deceased animal freak show, is that school children may actually have done the taxidermy themselves. If that is the case, I would hate to see the rabbits they’ve been cloning.

To me, this was the most light-hearted moment of the entire trip, by far. I had, of course, not at all expected any fun on a trip through North Korea. Most of the time I was anxious, worried about unwittingly doing something that was wrong by North Korean standards, which in turn could lead to huge and negative complications by anyone’s standards. After a few days of that worry, having this opportunity to walk around in this room and be able to just laugh at all the bizarre stuffed animals, it was extremely welcome.

At first we just quietly smiled as we observed all the crazy-looking creatures. Soon bursts of actual laughs surfaced, and within five minutes most of us were crying from laughing so much. There were several times during my time in North Korea I bordered on shedding a tear, but this was the only time I actually did it.

Thanks to a professional North Korean camera operator who documented our entire trip, I can share with you a short video from this experience. The music has been carefully chosen by the government of North Korea, so you may want to turn the volume down a bit before you press play.

Our North Korean guides/minders looked a bit puzzled by our reaction. They seemed glad to see us having a good time, especially because the source of our fun of was a collection of stuffed animals, and not stuffed political leaders.

I could see them frantically taking notes. They probably wrote something along the lines of “Ok, so we should never ever take foreigners here again. They are all happy. This can’t be good.”

What to think of it

This had been the first sort of feel-good experience of the tour, and a stark contrast against a series of more gloomy and serious stops on our way through North Korea. I’m sure it was intended to make us admire the quality of the school system of North Korea. It ended up being a real and close encounter with the actual situation at the school.

Just like I would have imagined, reality at a school in North Korea consists of some good parts and some bad parts. Both sides were easy to see here. If they were trying to hide the bad, it was an uninspired attempt. And that is a truly good sign.

The students here are probably hand-picked based on achievements in primary school. Many countries do that, because it is something that universally makes sense.

The school manages to run on what appeared to be extremely limited resources. Again, this is the situation in many countries. It may be somewhat frightening that so much teaching time is wasted on learning about the Kims. It still isn’t worse than how the teachings of the Quran and the words of Muhammad is a huge part of basic education in Muslim countries. Or how some schools in the USA actually teach creationism as an equal theory to, or even instead of, evolution.

I’m surprised that we actually were invited to come and look at the state of things this way. I think that’s commendable, and much more interesting than being introduced to yet another giant statue that needs to be bowed to. It’s just too bad that it was such a small part of the full program. 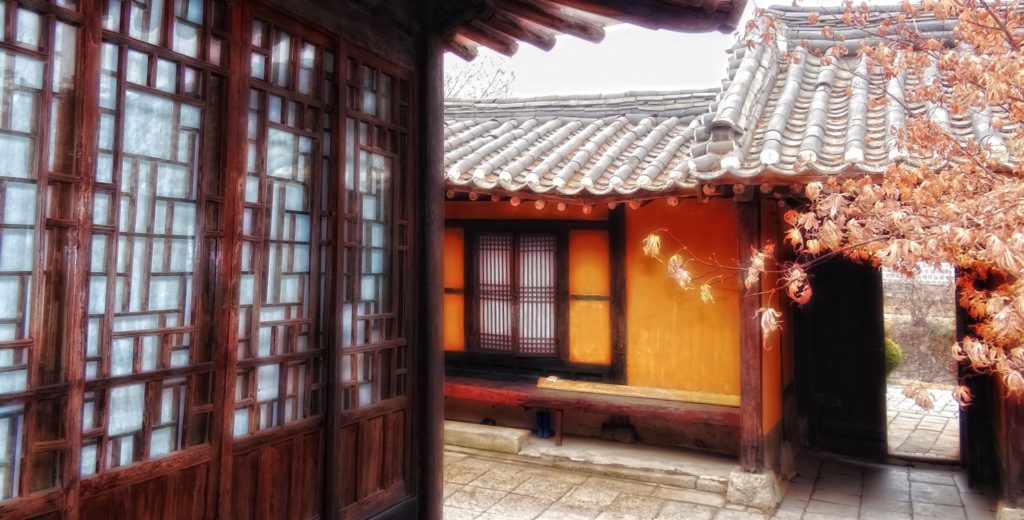 One Day in Bergen 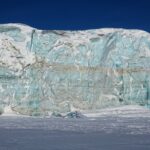 A Trip to the East Coast 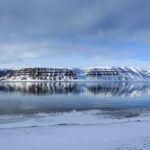 The Temple of Vroom 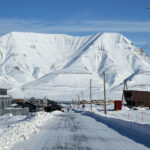 What to see in Longyearbyen 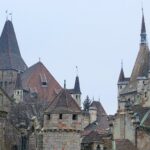